On Friday December 2nd I received my diploma as Google Innovator in Mexico City and it has been a very special and life changing experience not only for me but also for the 24 innovators who joined me. During the last three days we have discussed and shared our successes, failures, interests, passions, and dreams not only in education but also in our lives.

For many of my colleagues this experience began on 30 November at an innovation forum organized by Google that I could not attend because I was just arriving from Colombia. That afternoon at 4:00 pm the Academy officially started at Google’s Mexico offices. There we met with our coaches and the Googlers who would be our guides during these three days. We were greeted with Google Innovator T Shirts, a briefcase, our badge that included the phrase we had written in our application, mine said the wise words of Master Yoda, "Try not ... do or do not, there is no try!" as we read our badges we met all the other innovators attending the academy #MEX16, our group was composed by people from 6 different countries, Mexico, United States, Spain, Peru, Argentina, and Colombia; for me it was a great surprise to find out that after 10 years of Google Innovation Academies I am the first Colombian to attend one, I understand that this is a great responsibility and I should invite others to join me and be part of this adventure. 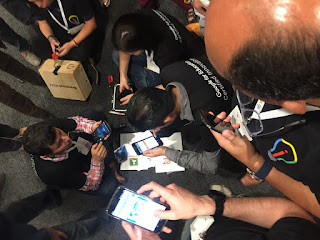 We were divided into groups and asked to choose a name for our group, pick a song to represent us and prepare a dance or choreography along with a team cheer. In our group we were Jacob, Efrain, Iñaki, Ceci, Mariana, Chris "Crafty" Craft (Coach) and Miroslava (Coach). We chose the name "Crafty and the Geeks," our song "Eye of the Tiger" and our cheer quickly became a battle cry. Later all groups presented their cheer and participated in a very interesting activity. Then the coaches surprised us with the first challenge, a Breakout EDU. I had only read of them, but had never participated in this kind of activity. We had 30 minutes to find and decipher the code that opened the 5 locks on the box. Unfortunately we could not open the last lock but we realized how important it was to collaborate, share and trust our partners.

We left sad to have failed, but we were happy in a few minutes after we were taken to the Google Cafeteria and they surprised with a small welcome party which had a very interesting variety of Mexican beers. I did not want to drink many beers, but Samuel Landete thought it would be interesting to try them all, so I took one for the team and joined him through five great beers.

The next day we had a Hangout with Mark Wagner, CEO of EdTechTeam who told us how important it was that we had an interest in innovation and changing education. I was very interested during his Hangout, he shared pictures of his children and talked about how seeing them interact with technology made him think that "our great mobile phone will be the most obsolete technology children will remember in a few years" It made me wonder "What‘s the most obsolete thing I remember? "I think it's the Betamax.

Later Rodrigo Pimentel, head of Google for Education LatAm came downstairs and to talk with all of us. He emphasized how important it was to understand that technology alone is useless. The goal is not to include technology for the sake of it. We must think about the purpose and role that it will play, what matters the most are the skills that we help our students develop, not the tools they use.

With Juan de Luca we worked on developing our innovative projects using design thinking, I had heard of the methodology but had never used it. It was very useful, especially the thinking of ideas and solutions without being limited by how ridiculous they sound.  Juan de Luca is a terrible guy (lol), he gave us 160 seconds to come up with eight ideas. Unlike others who say something but don't really enforce it he felt no regret or remorse, after 160 seconds the activity was over. That attitude really pushes you to think outside of the box and later evaluate.

Later we talked about those things that we are passionate about and do not have to be related to technology or education, but only what we like. This led to talks about all kinds of issues and I ended up presenting a keynote on storyboarding and creating feelings through the combination of images. Crafty wrote me at 2:00 pm "Federico prepare a presentation on storyboarding" I thought it was for Friday and told him that there was no problem, at what time did he need it and he says, "Now! you present at 4:30 pm." So by 4:30 pm i'm in the Google Zocalo boardroom giving a presentation on storyboarding. Something that was not on my bucket list but I can now say that I presented in a Google boardroom. I later I attended Valeria Torreblancas keynote, where we ate some delicious alfajores.
Afterwards Carolina Leal gave a talk on Personal Branding, in which we talked about how the image we project is very important, she was very clear when she told us “always be yourself, never pretend to be something you are not.” During her presentation I i thought of my wife, obviously because I missed her and wished she could have joined me here, but also because she is always aware of advising me on the way I project myself. I really like that she always tells me things how she sees them, she has no problem telling me "That's wrong!"

From there we went to what I think was the most awaited moment by the innovators, the Google Office Tour. It all started at the Juice Bar, Exercise Room, Gym, Pet Friendly Area, and climbing wall. During the trip we talked about the Google culture and how employees do not have a specific schedule, they choose how they work as long as they keep meeting their goals, we saw the playroom, the hydroponics they grow in the offices and later consume in the cafeteria’s salad bar, the stairs are full of fun facts about health and the environment. Seeing these offices made me think that employees are treated differently therefore they act differently. I thought about the way school want to change, they want students to change, teachers to change but the facilities remain the same. Simple things like how many calories you burn each step as you go up the stairs changes the experience, if you change the environment you may spark a cultural change. My school is in the process of constructing a new building and I will definitely speak with them about this. This tour ended with a little surprise, sushi and wine at the Google cafeteria. I'm not a big fan of wine so I only had water, Samuel and you? wine or water?

The next day we had a talk about makerspaces in education, in which I realized the hidden gold mine have in my classroom. For the last 4½ years I've had a closet full of technological relics. I should take them out and dismantle them to create a makerspace, probably the first one in Barranquilla, Colombia. 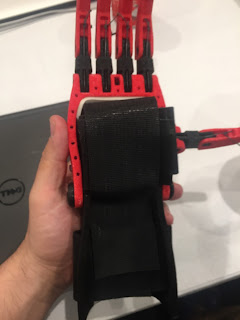 After learning about entrepreneurship Chris "Crafty" Craft gave a talk on  "Innovation - Having an Impact." Spanish is Crafty’s second language, but he is one of the best speakers I have ever met. He gave the talk in Spanish, and he knows how to make pauses, control his voice, and take advantage of his mistakes in Spanish to catch the audience in his presentation. Crafty told us about a very personal development program in which he uses 3D printers to help children who need a prosthetic hand. At the end of his talk he surprised us with a 3D printed hand and committed us to put it together and donate it to a needy child. I immediately thought that I would build it with my family and we would ask our great friend Padre Juan, the future Pope, to find someone who needs a prosthetic hand. I loved Crafty’s idea and I hope to bring it to my school and promote 3D printing with a social responsibility. There were several tears at the end of Crafty's presentation.

The EdTechTeam had perfectly scheduled the agenda because later Jack Fermon a googler working on connectivity gave a keynote In which he shared the importance of internet. What did he show us? An indigenous community in the Amazon who has no access to the internet and rely on books that take up to 4 months to arrive. What did Google do? Taught the community how to build a "Cantenna" an antenna made of cans that brings WiFi from a hill they placed a phone with 3G connectivity that the whole community helps pay. In other cases the “Cantenna” grabbed the signal from a restaurant which donated its internet to the town. It caught my attention that Google does not do it for them, but teaches them. Jack said, for Google it would be easier to just do it, because it has the resources and personnel for this work, but the idea is to share and teach.

At the end of this adventure we received our degree as Google Innovators. Now we only have to continue our projects. Share what we learned, in my case I hope to motivate and teach more people to join this cause. Sincerely I confess that I do not like writing, but I'm doing it because I feel I must share what I learned with as many people as possible in the shortest time possible, especially in my case where I am the first Colombian to benefit from this opportunity, it would not be fair to keep this for myself. As I have said and many of my fellow innovators said, this experience has changed our lives. We arrived as strangers and left as family.